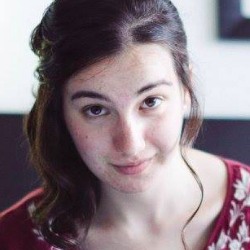 Ayelet, a Shana Ba’Aretz (SBA) alumna from 2011-2012 went on to study Classics at Princeton. She is now reading for the Oxford Masters of Philosophy in Judaism and Christianity in the Graeco-Roman World. She served as founder of the Undergraduate Judaic Studies Conference, Rosh Beit Midrash at Camp Stone, and a founding editor of the Lehrhaus journal . Ayelet currently teaches introductory spoken Latin at Oxford.

“Nishmat was one of the most caring communities that I have known. We were so different; some of us were going to make money, some would build families, some would study Torah, some would travel, some would serve in the army, but we learned together, listened to each other, and loved each other. Sometimes I’ll hear one of the tunes we used to sing over and over again, before Minchah during Elul or on Friday nights in Rav Yehoshua’s house, and I am back with those dazzling, energetic, kind women, who showed me that there are so many ways to approach Torah, and friendship, and life.”