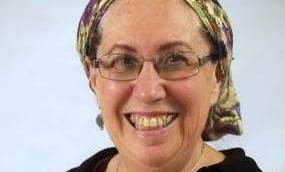 Rabbanit Chana Henkin, founder of program to train female halachic advisers, heads the list of 14 chosen for May ceremony

US-born Rabbanit Chana Henkin, a trailblazing educator of religious Jewish women will be among those to light a ceremonial torch during this year’s Independence Day celebrations on Mount Herzl.

Henkin moved to Israel from the US in the 1970s with her husband Yehuda. She is founder and dean of the Nishmat institute, a Jewish learning institution that was one of the first to teach women Talmud and Jewish law and she created the yoetzet halacha program which trains women to answer religious questions pertaining to family purity.

The Henkin’s son Eitam was murdered by Palestinian gunmen in October 2015 along with his wife Naama.

The theme for this year’s ceremony is “Jerusalem: the Eternal Capital of the State of Israel and the Jewish People.”

Culture Minister Miri Regev, who heads the selection committee, decided last year to include Jews from the Diaspora in the Independence Day torch lighting for the first time, saying their participation would symbolize the stake that Jewish people all over the world have in the Jewish state.

One is American Rabbi Marvin Hier, the founder of the Simon Wiesenthal Center in the US. Hier delivered a prayer at the inauguration of President Donald Trump, reciting the Psalm 137 passage that reads: “If I forget thee, O Jerusalem, may my right hand forget its skill. The doer of all these shall never falter.”

The other is Michael Steinhardt, a 76-year-old American investor, hedge fund manager and philanthropist. Along with Charles Bronfman he co-founded Taglit-Birthright Israel, which has to date sent over 500,000 young Jews aged 18–26 on a free 10-day trip to Israel.

The other torch lighters for 2017 are:

Yehoram Gaon, a 78-year-old Jerusalem-born singer, actor, director, producer, TV and radio host, and public figure. The committee selected him for his “significant contribution to Jerusalem” through his songs and plays, and his voluntary work for the city’s municipality.

Professor Amnon Shashua, a computer science professor at the Hebrew University in Jerusalem and co-founder of the Mobileye and OrCam startups. The committee is honoring him for his “combination of innovation and development of the city of Jerusalem.”

Uri Malmilian, 59, regarded as one of the best Israeli soccer players of all time. Malmilian is most famous for his time at Betar Yerushalayim for whom he scored 159 goals. He has subsequently managed various local teams. The committee described him as “one of the outstanding symbols of Israeli sport.”