As the saying goes, "Mi She'nichnas Adar, Marbim B'Simcha," "When Adar begins, joy increases". At Nishmat, this adage was understood not 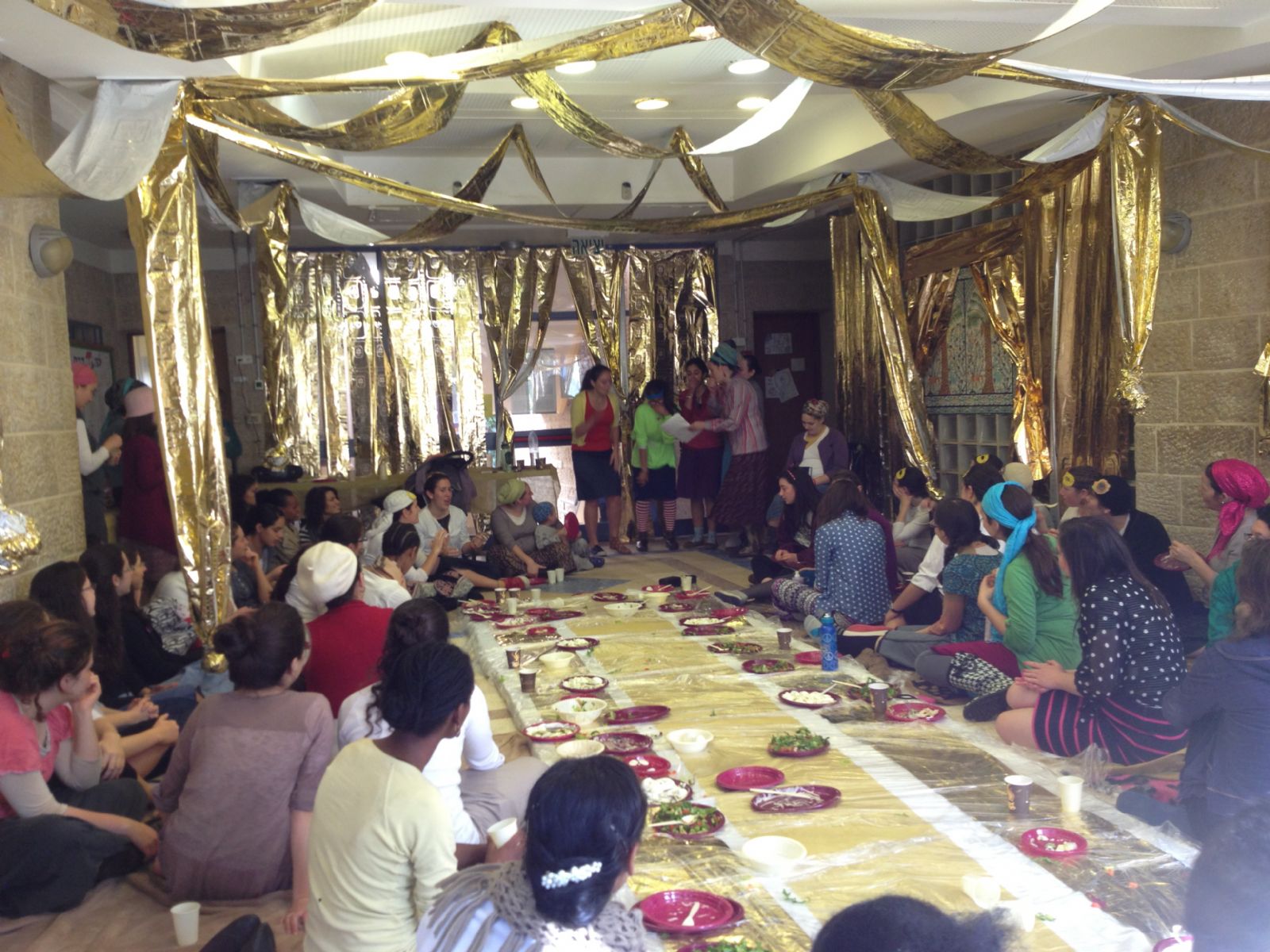 as a passive description of the time period, but rather as a call to action for the students to contribute to the Purim spirit in the midrasha. As the month eased closer to Purim, the energy at Nishmat gained momentum through the constant programming for, and by, the students. Soon, a palpable excitement was underway, formed by an enthusiastic Rosh Chodesh breakfast, humorous workshops, outlandish costumes and further festivities.

On Rosh Chodesh, the students gathered for a lively Hallel and tefillah service, followed by a "royal Persian"- themed breakfast organized by Shiur Hemshech. Shana Ba'Aretz quickly took their cue and entered Adar with an array of creative dress-up days, including "topsy-turvy," "Israeli", and the especially enjoyable "Rav Yehoshua day." Upon entering the Beit Midrash, all were reminded of Adar's special atmosphere.

Nishmat students also had the opportunity to partake in a "laughter workshop," where an expert in comedic therapy demonstrated exercises involving creative uses of humour. Through the unconventional session, students had the chance to let loose and awaken the Purim feeling in preparation for the Chag.

Yet another high point in the pre-Purim excitement was Shabbat "Tishkach" (the little-known commemoration before Shabbat Zachor), in which the various programs at Nishmat spent Shabbat together, showing off "schtick" to poke fun at their Rebbeim and teachers. (In all fairness, the faculty did indeed return the favor with hilarious costumes and comedy routines directed at the students.) On Shabbat, there was also a "Mechirah Pumbit," an auction using pages of Gemara learning as "currency." Prizes included an ice cream party with Gila Rosen, breakfast with Rabbanit Henkin, and Rav Yehoshua Weissberg's family cookbook. The auction brought out everyone's competitive sides, but more importantly, a renewed energy for Purim and Torah learning. After Shabbat, Shiur Alef organized a Tzedaka Fair, including raffles and refreshments for sale to benefit those in need. In this way, Nishmat put emphasis on the true meaning of Purim glee.

With all this preparation, it goes without saying the Purim itself was beyond joyous. Megillah reading was performed by Nishmat students, who practiced with dedication and care, and for many of whom this was a new opportunity. On such a high from retelling the Purim story, the Beit Midrash burst into dancing that lasted for hours, and expressed the depths of our collective celebration. As we jumped for song after song, and later swayed slowly before the Sifrei Torah, it became quite clear that the month's festivities were driven from a place of authentic spiritual happiness and the precious unity around which Purim is centered. Together, the midrasha combined each tochnit's-and each girl's-individual energies to shape a Purim of simcha at its finest.